Moby-Dick? Sure. Look In Our Fishing Section

(Originally published in the August issue of Psychologies magazine.)

— How would you define stupidity?

— Stupidity, in the way that I use it in the book, has a rather specific meaning. It is not a general lack of intelligence, thinking foolishly, or being unable to think quickly and clearly. The use of the word stupidity derives from the way Plato defined it in his dialogue, Sophist, and elsewhere: it is when a person supposes they know something that they do not know. It is a willful refusal to learn, typically because the person is already convinced they know something. That is stupidity. In the original Greek, agnoia – which has been translated as “necunoaştere” in the Romanian version of the quote that I cite, (which, by the way, is the origin of the Romanian “a nu cunoastere”) – means a simple ignorance. It is simply not knowing something. We are born that way. Amathia (which means “not to learn”) has been translated “neştiinţă”  (or “a nu şti”) in Romanian and also means ignorance, but it is that special type of ignorance called stupidity. An example I use is when your doctor states categorically and with full self-assurance what is wrong with you and does not want to listen to any other possible explanation – except it turns out, he’s not right. Ironically, the more intelligent someone is, or believes they are, the more “stupid” they often become.

-- Why aren’t we used to think logically? Education? Laziness?

— Clearly, some people are better logical thinkers than others. But it can certainly be taught and needs to be practiced. So it is both a matter of education and laziness. Yet thinking logically and rationally is only half the battle and not always the most important aspect of avoiding stupidity. Many of us can think very clearly about a problem and design a very logical solution. That’s good, but thinking logically is not enough. You need to think about the right things to avoid stupidity. Thinking logically without thinking critically can be not just a waste of time but can put you on the wrong track. Thinking critically involves seeing the problem clearly, not just thinking clearly. Thinking critically begins with a person assessing or verifying that the problem they are about to solve is indeed the right problem – the right problem in the right context. Part of that challenge is also knowing what their solution needs to achieve. Logically solving the wrong problem is worse than not doing anything.

— If you were to give 3 pieces of advice to people, in order for them to become smarter, what would those be?

— There is a difference between being smarter and being less stupid. Becoming smarter is often a matter of knowledge, the result of curiosity, paying attention, reading, working, and practicing. Becoming less stupid involves asking the right questions and knowing what facts and ideas are important to the problem and what are not.
As for the three things you ask, I don’t believe there are only three. But here are three that will certainly help. Importantly, it is vital to remember that stupidity loves complacency and insecurity. Overcome those and the rest comes much more easily.

— Is philosophy really useful? Cause you explain lots of philosophical theories in your book and try to apply them to life.

— We all have philosophical theories we live by every day, all the time. We just don’t stop to identify them or categorize them as such. That’s fine. Not everyone must study philosophy. I touch on various philosophical theories in the book not to teach them necessarily but to allow the reader to see they exist. That is why I don’t go into much depth, but give a general overview. This way, the reader can help identify which of these theories they believe, what the assumptions of those theories are, and what the ramifications of those theories are. For example, it makes a big differenc 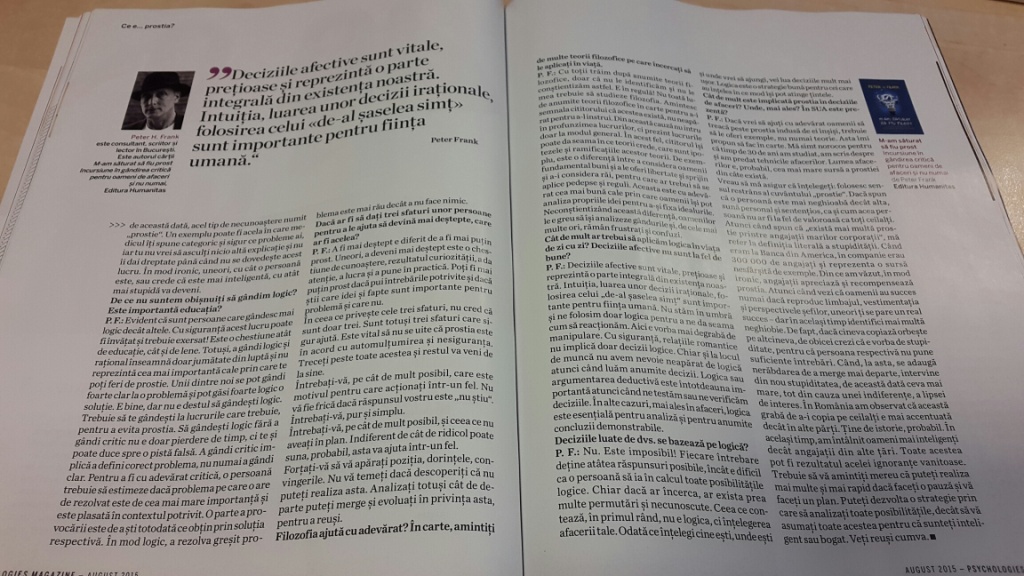 e in how you live or manage your company depending on whether you believe fundamentally that people are good and should be given freedom and encouragement or that people are essentially bad and must be given rules and harsh punishments. Importantly, this is really the best way for people to begin to question their ideas so they can begin to question and decide on their goals. Without it, most people have a hard time dissecting and analyzing their thoughts and too often remain frustrated and confused.

— How much logic are we supposed to apply in everyday life? Emotional decisions aren’t as good?

— Emotional decisions are vital, valuable and an integral part of our existence. Intuition, irrational decision making, understanding through a “sixth sense” are all important parts of being human. We do not sit back and solely use logic to know how to react to another individual. That would be rather cold manipulation. We certainly don’t base our romantic relationships solely on logical decisions. We don’t even need logic necessarily when we make certain decisions at work. But logic, or deductive reasoning, is always important in testing and double-checking our decisions. In other cases, especially in business, the logic needed for valid analysis and provable conclusions are essential.

— Do you apply logic in every decision you yourself make?!

— No. That’s impossible. Each question typically has too many possible answers for anyone to play out all the logical sequences. Even if they tried, there would be too many permutations and too many unknowns. Again, it’s not the logic that comes first. It is the understanding – of yourself, or of your business. Because once you understand who you are, where you are, and where you want to go in life, decisions become very easy. The application of logic is best applied after those have been recognized and narrowed and you are looking for how to create a strategy to apply your understanding and achieve your goals.

– How much stupidity is involved in decision making in business? And where? In US as well?

— I believe if you truly want to help people overcome their self-inflicted stupidity, you must give them examples, not just theory. That’s what I try to do in the book. The fact is I have been fortunate to spend more than 30 years studying, writing, doing, and teaching business, because as a purely human construct, the business world is probably the richest source of stupidity that exists anywhere.

Now, I want to be careful to ensure that you understand that I am using the narrow sense of the word stupidity here in this answer. Because if I say this person is more stupid than that person, that sounds terribly judgmental and personal, as if that person does not have the same value to me as someone else. So if I say that I tend to see more stupidity among employees in large corporations, I mean that using the literal definition of stupidity. (When I was at Bank of America, the company had 300,000 employees and was a never-ending source of examples.) Indeed, from what I’ve seen, stupidity among employees is ironically often most valued and rewarded. Because where you see people succeeding by replicating the perspective, the language, the dress, the approach, the assumptions of their bosses, you often see greater success – but you also see more stupidity. In fact, where you see anyone blindly copying what they see elsewhere, you usually see greater stupidity because the person is not asking enough questions. Now, when you add to that an impatience to move ahead and get going, you also can see a greater susceptibility for stupidity because, again, not enough questions are being asked. Here in Romania, I have seen more blind rushing ahead than I’ve seen elsewhere. It has to do with your history. At the same time, I’ve actually found people here smarter and more clever than employees in other countries. But that, too, as we’ve said, can result in that conceited self-imposed ignorance. You must always remember that you achieve more and usually achieve it more quickly if you stop and take a bit of time to plan, to consider, and develop a strategy that has considered all the possibilities rather than assume that because you’re smart or because you’re rich, you will somehow succeed.