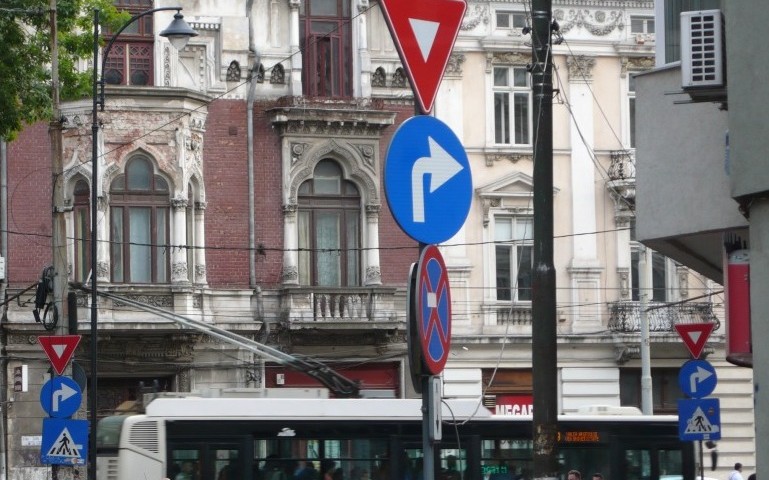 You can learn a lot about a society by the way people drive. The problem is I’m just not sure what that is.

I always found driving in New York City relatively easy. You raced up or down the avenues timing your ride to the timing of green lights. You did everything you could to avoid going crosstown. You cut in front of anyone. You swerved around potholes in the middle of heavy traffic after a pretend glance in the mirror. You battled other cars, avoided fighting taxis, and you knew pedestrians would run.  And 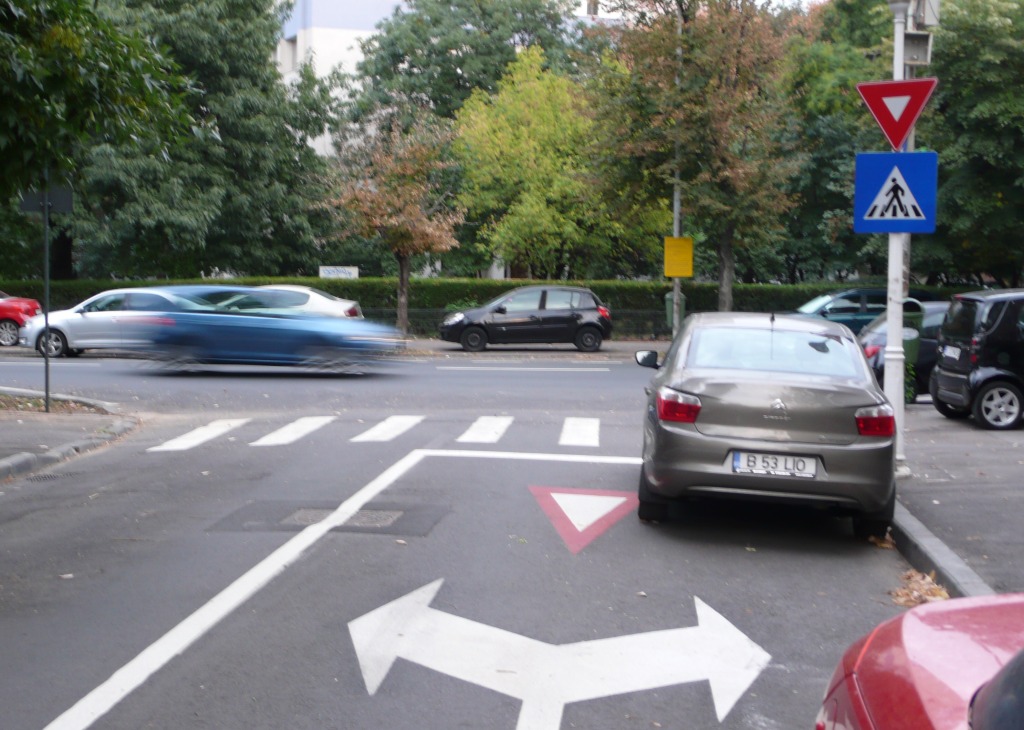 as your car sped forward and you flew down the streets, you knew all was ok because everyone was doing it, like the instinctive fluid motion of a school of big fish.

Driving in Mexico City was not quite the same. There, mostly you crept onto the city’s main streets and basically parked, sliding forward at about the same pace as the sun overhead. And while you kept an eye out for thieves, vendors in the road would walk past your car selling  ice cream and water and garment bags and pencils. If you ever got as far as an intersection,

you knew whichever car’s bumper was the first one to arrive had just won the right to move the next inch. There was competition to be sure, but never did I find it aggressive or mean.

In Dallas and New Jersey and Baltimore, driving was simple. Most of the roads were straight. There were always some madmen around but everyone was so afraid of dying that people generally took care. In Los Angeles, it was like driving in a video game only a lot less believable.  And in Washington, D.C., with all the avenues on diagonals, traffic circles and one-way streets, half

the drivers were lost, so you were always in good shape if you had any idea where to go.

In England, simply put, driving was boring. Except for the fact that everything was on the wrong side of everything, traffic moved politely as if everyone was waiting in a 60-mile-per-hour queue.

Even driving a taxi 12 hours a night in Philadelphia was ok.  It wasn’t the traffic and other drivers you worried about anyway.  It was the ranting, gun-wielding passengers – who were almost as scary as the Yellow Cab’s Teamster bosses.

No, it wasn’t until I got to Bucharest that I truly learned to fear driving. It’s not the roads or the traffic that make traversing the city so scary. It’s the other drivers and pedestrians and the fact that all the lights are put in the wrong place. (In case you’ve not been here, the signals are sadistically located 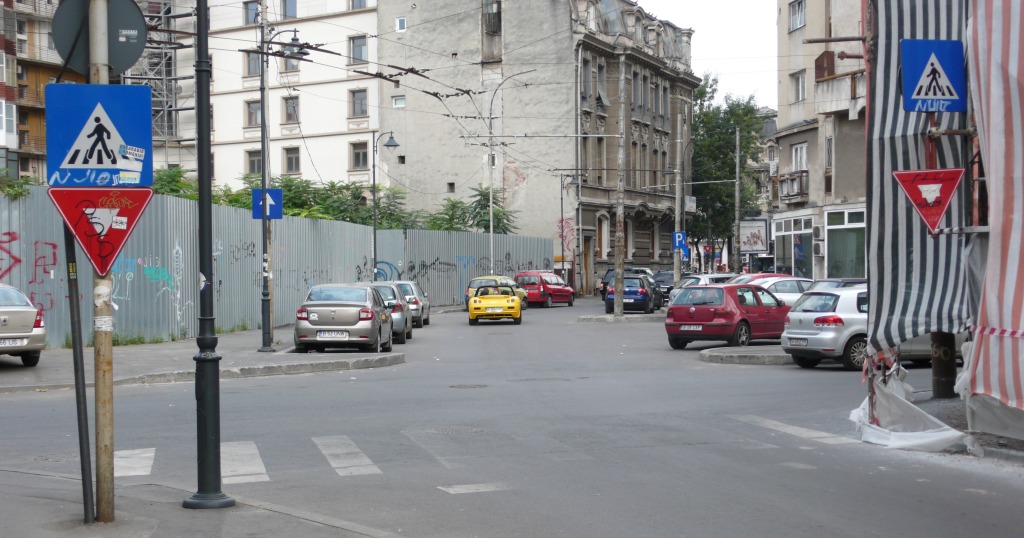 before you go through the intersection so when you find yourself halfway across an expanse of pavement about the size of Bermuda and you begin to see other cars moving at you, you have no way of knowing if you should stop where you are or play bumper cars up ahead. Even when you do stop in time, if you have the unfortunate luck to be the first at the light, they are now so far to the side or somewhere above you, you need to wait for the very helpful and friendly honking of the 20 cars behind you gently intimating in unison that the light has turned green.)

But then slowly you learn that to survive driving here, you must master only two things.  Yes, only two things.  Firstly, you have to assume that everyone is driving rationally and carefully just like you and then you must dismiss that thought entirely and instead anticipate them doing precisely the opposite of whatever you would expect. 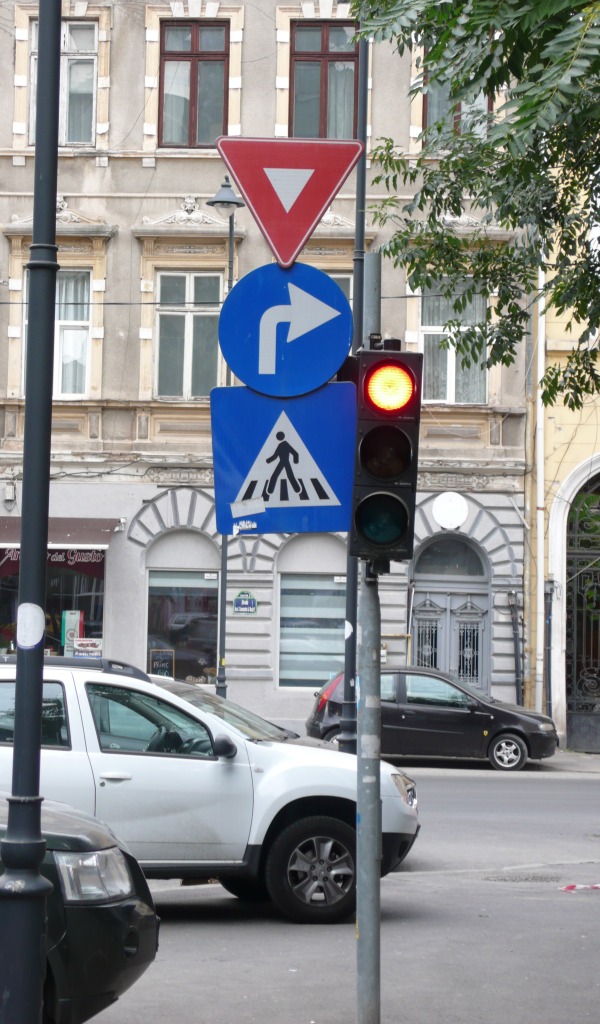 With no right on red allowed here, you apparently have to wait to yield until you have the green light.

After you do that, then you’ll discover that whatever you’re now thinking is also not at all what they’ll do and instead you should anticipate that what’s most likely to happen is whatever is inconceivable for you to imagine them doing.  And finally, you learn that’s not what they’ll do either. Once you know this, you’ll begin to be fine.

Fine, that is, until you run into the second small problem: pedestrians. (And please know, of course, that when I say “run into” pedestrians, I mean that literally). You see, because the streets are too long and there are not enough lights, the city is strewn with a few million random crosswalks painted anywhere someone wants one, across little streets, across big thoroughfares, a few that cross highways and one or two on airport tarmacs. It really doesn’t matter. What’s vital to know is that it’s your job as a driver to stop (now that sounds Communist to me, no?) and the way you know to do that is you must watch for one of the few million small signs, made of a blue invisible substance, that are somewhere not near the road. So as you’re driving and praying that the car to your left doesn’t suddenly swing right for absolutely no reason just as the guy backing out of his driveway into the road without looking will stop in time for the car driving along the sidewalk to pull into your lane you also are expected to be searching for some sign that you can’t see to warn 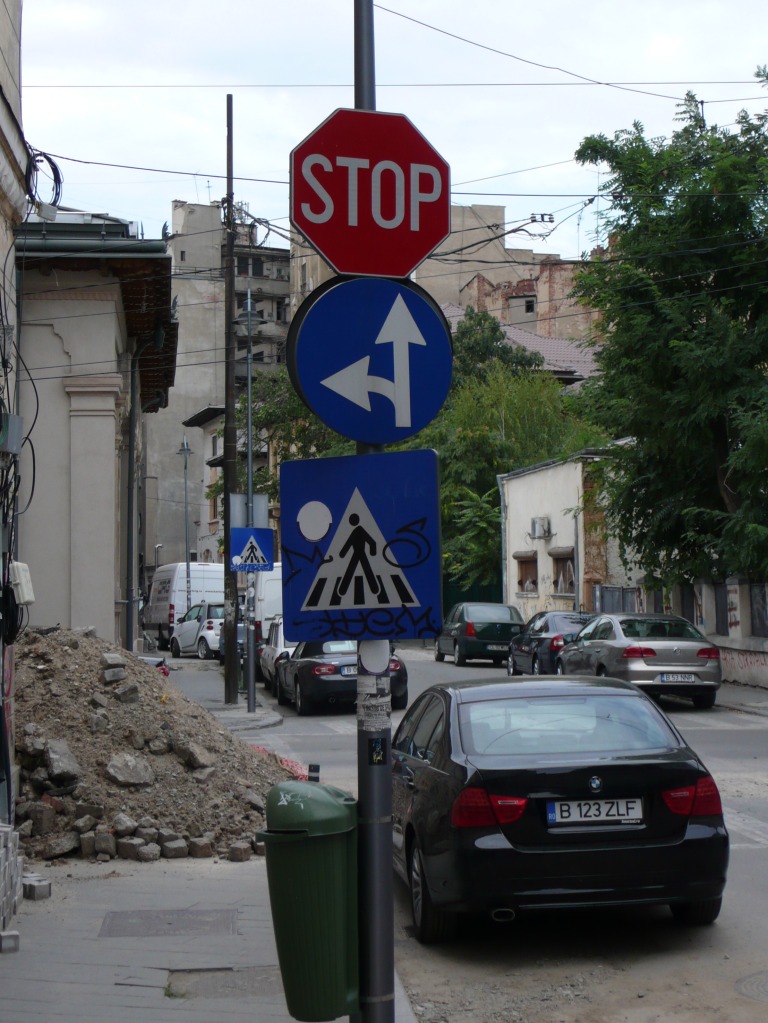 One of the three Stop signs in Bucharest.

you that in seconds an old lady is about to step in front of your car.

Got it? Ok. Now that you understand this, let me tell you the really strange thing about driving here. There are no Stop signs.

That’s right. And when I say there are none, of course, I mean I’ve seen three. In the entire city of 2 million people, each of whom appear to drive eight or nine cars. Yes, three – and two of them were in the same place.

Don’t ask me why. For some unknown reason having to do with the homogenous Dacian-Latin-Saxon-Slavian-Magyan culture or perhaps an endemic genetic Bucharestian fear of octagons, the idea of Stop signs apparently never arrived here. Personally, my theory is that everyone expected the Americans to bring them when they got here at the end of World War II – and we know how that worked out.

Now, for those of you who have never driven between here and the US, let me tell you that in America there are Stop signs  everywhere. Even in parking lots and alleys and at the end of one-way streets. If there’s room, there’s a Stop sign. It’s part of our national philosophy: “If in doubt, make them stop.” (And if you’ve seen recent stories about our police, you know what I mean.) And if we don’t make you Stop, then we tell you to Go.  No weak, in-between indecision for us.  No sir.  Because as Americans, you should know, it’s always more important to make a definite decision than to worry about being right.

And the fact is, in most of this country, there are plenty of Stop signs.  Yet here? Instead, in Bucharest, everywhere, you are ordered to Yield.  Not Stop.  Not Go.  Just Yield. In other words, don’t stop unless you have to – and if you do have to, then go ahead and pull out into the intersection and make the other guy yield to you. 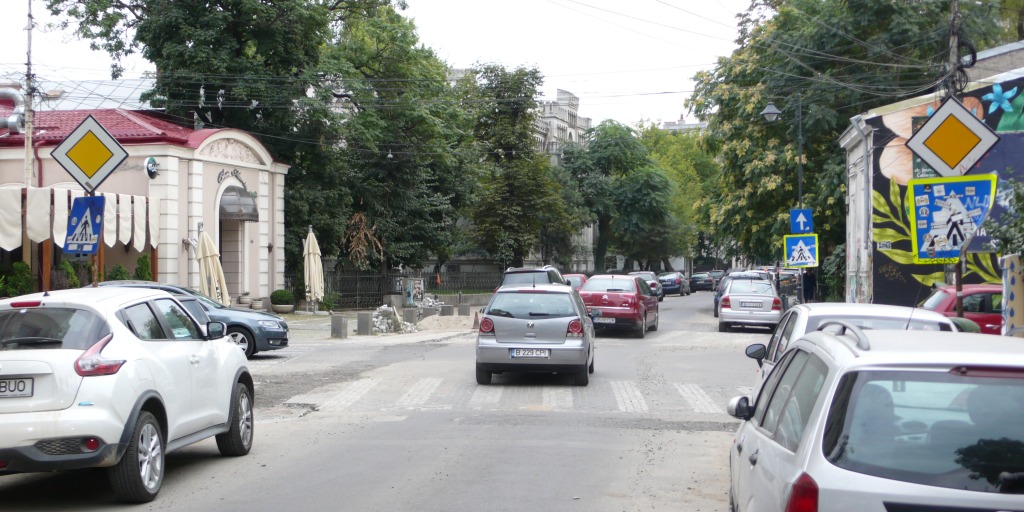 I have no idea what these yellow boxes mean, but if I were you, I would yield here, too.

In a way, it makes sense. Of course, when coming to an intersection where there are busses and bicycles and cars and motorcycles and trucks and scooters and baby carriages and skateboards and shopping bag-laden old women chasing trams that are speeding left and right with another couple roads that all come together, you’re likely to consider the idea of  stopping just a little if for no other reason than to miss out on a sudden and painful fire-consuming death.  I also suppose Yield signs everywhere help avoid the complication that other cities suffer when they must explain that, though it says Stop, the sign also tacitly contains the concept “and then Go. ”

In some ways, of course, “Yield” is less harsh of a concept than the order to “Stop.” But given the decades of Communism when “Yield” was how you lived unless you wanted to go to jail, wouldn’t you rather read a sign that is more democratic and generally more honest?  Yes, a sign that more accurately reflects the values of society.  A sign that honestly conveys how people think and drive.  I wonder what shape we should use for a sign that announces:  “Warning:  If you don’t hurry up, the other guy wins.”